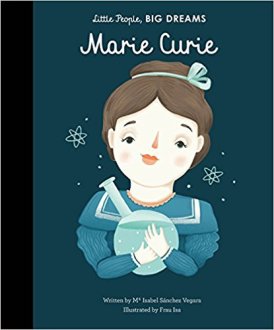 Did you know that Marie Curie was a world-recognized scientist who won two Nobel prizes for science? In the delightful picture book Little People, Big Dreams: Marie Curie educates the youngest of children about this amazing woman in history and her importance in the field of science.

Marie Curie was born in Poland in 1897. She grew up poor but was very smart, and won a gold medal for her school work at a very young age. When it came time for her to go to college, she moved to France, because women were not able to attend college in her home county of Poland.

To attend college in France, Marie had to learn a new language; it was not easy for her, but not only did she learn to speak French, she became the best math and science student in Paris. She met her husband Pierre Curie. Marie and Peter discovered two radioactive elements – radium and polonium, which led them to win the Nobel Prize for Physics in 1903. Years later, after Marie’s husband Pierre died, in 1911, Marie won another Nobel Prize for Chemistry. Her later discoveries were used to help injured soldiers in World War I (WWI).

These accomplishments and more, including the educational foundation in France created in Marie’s honor are included in  Little People, Big Dreams: Marie Curie, which is a great picture book for introducing an appreciation of female scientists. As it does not give a detailed description of Marie Curie’s life, it is better suited to children ages 5-7.