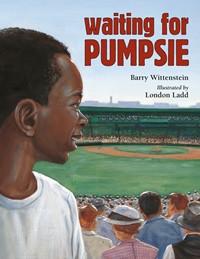 Baseball fever is here! It’s MLB All Star weekend, and the perfect time to review Waiting for Pumpsie, a a young Red Sox fan living in 1959, who learns lessons about fairness, hope and family, and of course – baseball!
Bernard LOVES the Red Sox! But he doesn’t like that his favorite team doesn’t have an African-American player. Bernard lives in 1959, when racism against blacks was still highly accepted; African-Americans were referred to as “Negro”, and prejudice against them were a regular part of life.
Each year Bernard and his family go to Fenway Park to watch the Red Sox play, but after being mistreated by some fans who are white, the family goes back to listening to the games on the radio.
Bernard’s parents tell him not to give up hope; change is coming they tell him, and they are hopeful the Red Sox will bring on a Negro player soon. Then one day it happens! Bernard’s dad reads in the newspaper about a minor league player named Pumpsie Green. The Red Sox give Pumpsie a chance to play and history is made in Boston!
When Pumpsie makes history for the Red Sox, he is like a movie star; all the reporters want his picture. Things get even better when one day Bernard’s dad surprises Bernard and his family with tickets to go see Pumpsie play at Fenway Park. Although some people say mean things about Pumpsie during the game, Bernard’s family ignores them and doesn’t let it spoil their fun – not this time!
Waiting for Pumpsie is an action-filled story that keeps the reader wondering what will happen next, and it is easy enough that children can read on their own or with an adult. Educators and parents will like how the story addresses the prejudice endured by African-Americans in everyday life before the civil rights era. The Authors Note in back is also very informative.
One of the best things about Waiting for Pumpsie is its positive portrayal of the African-American family. Bernard’s family love and support one another, and regularly discusses important issues together, which is something that has been lost in many American families. The book not only addresses the issue of racism, but shows how as a family, the problem can be faced without anger, bitterness or contempt – a lesson that is as important today in 2018, as is was in 1957.
Waiting for Pumpsie
Author: Barry Wittenstein
Illustrator: London Ladd